skip to main | skip to sidebar

What an amazing, perfect day!

Wedding Preparation
The weather started out rainy, but by the time we were due to leave the hotel all precipitation had stopped and we were able to walk through the village to The Upper Crust. Mom and Emily came to the hotel to help me and get ready and Alison showed up a bit later with the bubbly.

The walk to the wedding was very interesting, I hadn't anticipated all the starring and comments, but it was fun anyhow.


The Wedding Ceremony
The ceremony was wonderful, everything turned out perfectly including the readings by Emily and Pia and Christopher's song.

I was VERY nervous when reading my vows and had to stop twice, how embarrassing. Ari did a fantastic job during his.

The Party
The reception was all we had hoped it would be, we had such an amazing time - it went by so very fast! We had so much fun eating, dancing, and spending time with all the wonderful friends and family who were there to help us celebrate.

We all danced the night away, including a Journey finale involving much loud singing and jumping - what a blast!


The Details
Dan, from The Upper Crust and I came up with what turned out to be a spectacular decor plan for the reception. I made three different types of votives for the tables, Mom made a beautiful runner for the main table and I also created 15 feet of strands of semi-precious beads to hang from the chandeliers. All these details combined for truly fantastic decorations.

The catering team was not to be outdone, the menu was just as amazing and extremely delicious.


And of course the cake - which was actually amazing spice, chocolate and vanilla cupcakes - looked fantastic.

Our Planners/Decorators/Caterers/Etc: The Upper Crust
Our Space: 91 Horatio Street
Our photographer: Dante Williams, see his blog here
Our Officiant: Rev. Phil Passantino
Posted by Becky at 1:25 PM No comments:

I was having a very difficult time coming up with intriguing ideas for a wedding gift for Ari. We were also trying to get so many things done in a relatively short time that I didn't have as much time as I needed to investigate really unique, fun options. I thought custom artwork would be an interesting idea, and actually found an artist who's work is beautiful, incorporating personal photos into the pieces in very unique ways. I had also been researching wedding rings - Ari wasn't interested in the standard designs you find in your standard jewelry stores - and I came across New York Wedding Ring, where you work with the studio metalsmith to design and create custom wedding rings. I decided if I could pull it off and make something that didn't look silly, it would be perfect - two birds, one precious metal stone.

I made Ari's wedding ring with Sam, owner and operator of New York Wedding Ring and am SO happy with the results. Sam and I decided on a base of white gold with a platinum inlay and a smaller silver inlay. I arrived at the studio on a Sunday morning to start what turned out to be a metalsmithing marathon. First we went over the studio basics, reviewed the metal he had purchased for me and discussed the game plan. There was no lathe in the studio so the channels that we had to carved for the platinum and silver would need to be done the hard way - and by this I mean seriously hard. We eventually (4 hours and a few blisters later) managed to file, engrave and carve something the platinum could fit in. This picture is the from this first stage of the ring - soldering the platinum inlay to the white gold base. 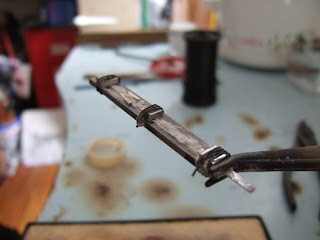 Since I carved the channel a bit too deep the platinum wasn't lying correctly and kept popping out of place. We used some random bits of metal Sam had lying around and steel bonding wire to keep the platinum in place while soldering. Once the platinum was securely attached to the white gold base we were able to make it into a ring shape and then solder it all together. Of course, this also turned out to be much easier said than done. The platinum anneals (done to make the metal bendable and to remove any spring in it) at a much higher temperature than the white gold. Since we didn't want to melt the white gold into a lump of uselessness we couldn't anneal the platinum all the way so, of course, when we tried to solder the ends of the ring together, the platinum still had spring in it - and thus the ends popped away from each other. The steel bonding wire saved us again - as you can see in the below picture we wrapped the ring tightly in bonding wire in the hopes that it would keep the ring together. 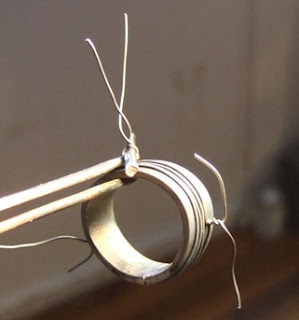 Everything we attempted to do turned out to be much harder than originally planned, so we shouldn't have been surprised when we tried to take the bonding wire off the ring and it was stuck. Instead of a ring we had a mildly interesting sculpture: 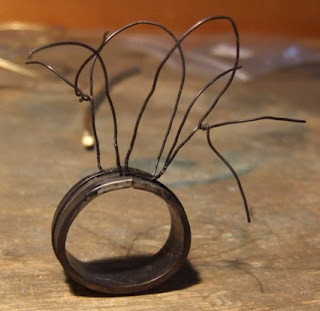 Thank goodness for Sam - I would have melted the stupid thing into a blob and thrown it out the window. Instead, we filed off the steel bonding wire and moved on to carving the channel for the silver (which was much smaller thank god) and soldered it into the ring. Almost done right? Almost, but not quite. Now on to 3 hours of filing, sanding, rounding, and perfecting. Fourteen and a half hours after we started the ring was done - and much more attractive than a melted projectile blob of precious metal.

Its really hard to get good pictures of jewelry, but here are some of the better ones. (The ring isn't yellow in color at all, despite the tint in the pics.) 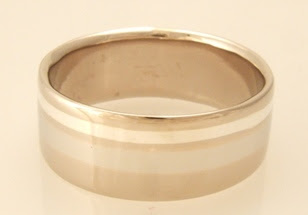 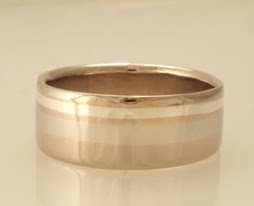 The white gold is the darkest metal, platinum the wide stripe, and silver the smallest and lightest stripe.
Posted by Becky at 8:50 AM 1 comment: 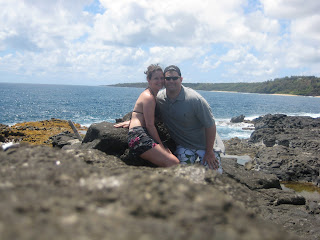 We got engaged in Kauai, Hawaii at the Lava Pools of Mokolea on a beautiful morning in May, just in time for our 8th anniversary. We went for a hike at the pools, which you get to by driving on a "road" (much more like a busted path) to the coast. When we got there there was only one other couple there who soon left. It was our first hike where we were the only people around to enjoy the amazing scenery. Ari even got down on his knee on the jagged lava rocks! We are so happy!
Posted by Becky at 12:34 PM No comments: